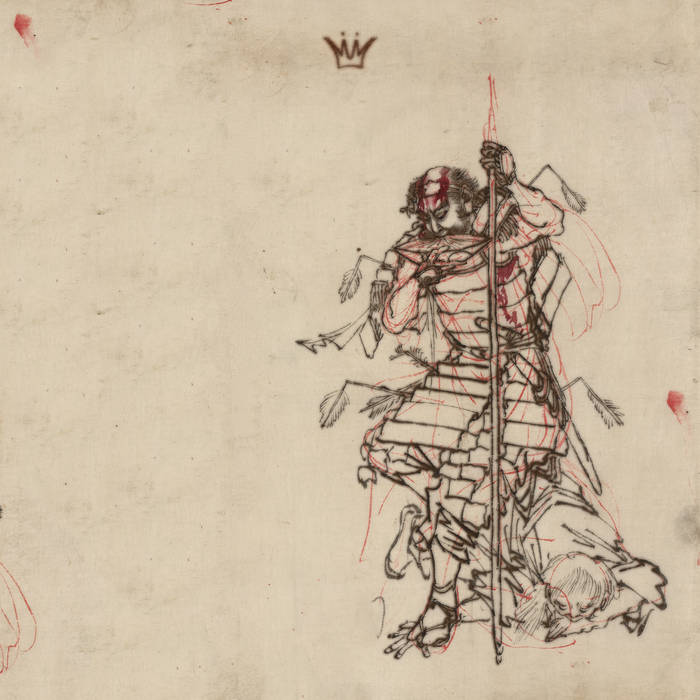 Jeremy / HI54LOFI A massive collaboration compilation featuring a whole bunch of my favourite hip hop artists? Ok, just let me go grab my samurai sword and then I'm all in. Favorite track: No Trouble (feat. Oddisee).

In feudal Japan, the Bushido Code defined the way of the samurai. It was a blueprint to conduct warfare with honor: a system built upon the qualities of rectitude and courage, honor and loyalty. In the modern world, these historical tenets may seem antiquated, or sometimes even obsolete. But the power of tradition is resolute and unyielding. The art of the rugged drum and the razor tongued rap are timeless.

After a decade in the music business, Mello Music Group has witnessed the dealings and promises of the record industry. Running counter-clockwise to the mainstream ethic, Mello has settled on its own code of conduct and value system. Their catalogue is a Hagakare of hip-hop -- a practical and spiritual guide to the essence. While the sounds are varied, an MMG release ensures that the art comes first, the artists are religiously devoted to the upholding of standards and values. The musicians swing fast blades and fly the Mello banner with speed and strength.

This is Bushido, the latest Mello Music compilation gathering the current roster and the label’s closest brethren. As always, the core shoguns are present: Apollo Brown, Oddisee, Quelle Chris, L'Orange, Joell Ortiz, Skyzoo, and Homeboy Sandman. The rated rookies brandish sharpened swords: Solemn Brigham, Namir Blade, and The Lasso. The legacy teammates with championship trophies are all present: Open Mike Eagle, Georgia Anne Muldrow, Elaquent, Kool Keith, and Mr. Lif. So are label affiliates, Murs, The Alchemist, RJ Payne, and B-Real. The veteran general rounds out the roster, Stalley, the newest member of the Mello family. This isn’t merely an anthology, it’s a fully formed vision of what hip-hop can be. A meticulously assembled arsenal of past, present, and future.

Label Daimyo Michael Tolle, has historically used these compilations as an opportunity to create and build, pair new collaborations, and curate the sound for the coming year. At first, these albums heralded the arrival of a new hip-hop force; now, they serve as a reminder that Mello has expanded upon the proud lineage of seminal indie labels like Loud, Stones Throw, Rhymesayers, and Def Jux. It is a sanctuary of the raw. At its core, the artists achieve a platonic ideal of hip-hop. You can hear the spirit of Mobb Deep and Wu-Tang in a song like “Iron Steel Samurai” -- where The Alchemist conjures a brimstone inferno of crunching guitars and anvil drums, and Quelle Chris drops haikus in blood, dousing sauce on everything like siracha.

The label’s ingenuity partially stems from its gift at bridging the generations. Between Kool Keith, Mr. Lif, Murs, Alchemist and B-Real, you have artists who fathered entire schools of hip-hop (Keith might well be the Abraham for every left-field MC ). Similarly, the first generation of Mello artists has defined the otherground of this era. Here, Oddisee, Apollo Brown and L’ Orange, embody the distinguished tradition of Pete Rock and Preemo, Dilla and Madlib. On “Gold Gloves” and “Symbol of Hope,” Open Mike Eagle whimsically balances between comic despair and existential mind wandering, like the last great member of the Native Tongues. While Skyzoo and Joell decapitate microphones with masterful swings. So on the beautiful carnage goes.

The album and overarching spirit are perhaps best defined by a moment on Homeboy Sandman’s “None.” Like a long lost virtuoso from the Last Poets, Sandman ponders a question at the heart of the matter. He shrugs his shoulders about the current trends, the ones soon to fade out of fashion with the changing of the season. He sagely muses that there’s nothing wrong with liking a different type of song, grateful for his creative freedom from commercial pigeonholing. “There’s a reason why I don’t got to play along,” he raps. “But how many can do I what I can do? None…”

It’s a moment that harkens back to the spark of creation that underpins the label: the rigorous code and idiosyncratic originality. A place that reveres the past, while securing the present for future generations. Something that goes on past the music, a deeper aspiration towards something that Tsunetomo Yamamoto wrote in The Book of the Samurai: “It is said that what is called "the spirit of an age" is something to which one cannot return. Although one would like to change today's world back to the spirit of one hundred years or more ago, it cannot be done. Thus, it is important to make the best out of every generation.”